This spring, Mexico City has been choking under some of its worst smog conditions in years. The problem is ozone. Pollution alerts for ozone have been issued repeatedly, triggering “double” driving restrictions that have pulled hundreds of thousands of cars off the road, twice as many as usual. But what if cars are not the problem? I’ve been combing through recent data from Mexico City and the relationship between cars and ozone is tenuous at best. 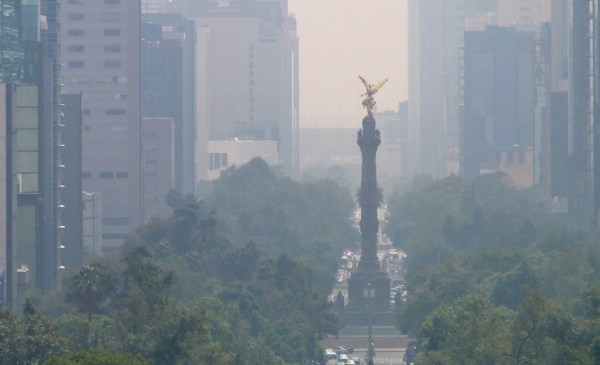 If you want to look at a pollutant that is tightly related to driving, take carbon monoxide. As the figure below shows, carbon monoxide levels in Mexico City tend to peak at 8 a.m. or 9 a.m., when the roads are jammed with commuters trying to get to work. Emissions inventories show that 99 percent of carbon monoxide in Mexico City comes from cars, and you can see this in the daily pattern.

The pattern for carbon monoxide also differs across days of the week. The figure shows only Friday through Monday, but this is enough to be able to compare weekdays to weekends. Friday, Monday and other weekdays have the biggest peaks. Saturday and in particular, Sunday, have lower peaks. Again, this reflects driving. After battling traffic all week, people in Mexico City are happy to drive less on weekends.

Ozone has a very different pattern, peaking in the middle of the day when the sun is highest in the sky. There is no peak during the morning commute like you see with carbon monoxide. But even more revealing, notice that the peak for ozone is similar across all days of the week. Weekend ozone levels are just as high as weekday levels, even though many fewer cars are on the road. When people drive less, carbon monoxide levels go down. Ozone levels? Not so much.

Note: These figures were constructed by Lucas Davis (UC Berkeley) using hourly pollution data from Mexico City’s Automated Environmental Monitoring Network. Each observation is mean pollution averaged over all monitoring stations for a specific hour and day, and the figures use all hours between January 2015 and April 2017.

I’m an economist, not an atmospheric scientist, but I think the data give a clear picture of what is going on here. Ozone is the classic “secondary” pollutant, meaning that it is not emitted directly but instead is formed in the atmosphere as a product of other pollutants.  The basic recipe for ozone is simple. Take volatile organic compounds (VOCs) and nitrogen oxides (NOx). Add sun. Chemical reactions happen. Voila!! You get ozone, a pollutant that not only causes smog but also is very dangerous for human health.

But here’s the deal: You need both VOCs and NOx. If you are short one of these two ingredients, you can’t substitute more of the other. In econ-speak, we’d describe this as a “Leontief” production function. In areas where there are lots of VOCs, ozone formation is “NOx-limited.” A reduction in VOCs will have little impact, because the process already has more VOCs than it can use. Similarly, in areas where there is lots of NOx, ozone formation is “VOC-limited,” and a reduction in NOx will have little impact. 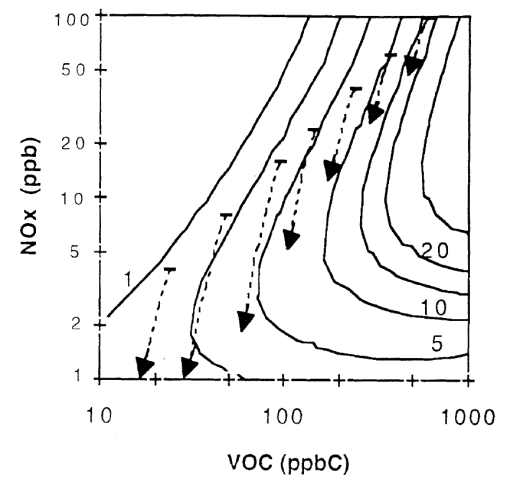 Surprisingly, there is no consensus in the scientific literature on whether Mexico City is NOx- or VOC-limited. See here and here.  But the recent data provide pretty clear evidence that Mexico City is, in fact, VOC-limited. NOx levels are much lower on weekends, but ozone levels are not.

In fact, Sunday ozone levels in Mexico City are actually somewhat higher than other days of the week, consistent with the backward bending part of the curves above. For places that are severely VOC-limited, ozone production can actually increase when NOx concentrations drop. In other words, when VOCs are the constraint to ozone production, more cars on the road can actually reduce ozone levels!

Given this evidence, it seems crazy to try to reduce ozone levels by restricting driving. Sunday is, in some sense, an extreme version of what could be achieved through driving restrictions. And while many pollutants are indeed lower on Sundays, ozone is not. Driving is not the problem.

What are the policy implications?  First, drop the double driving restrictions on high-ozone days. There is no evidence that this has any impact on ozone levels. And, more generally, driving restrictions have been widely shown to be an expensive and ineffective approach to addressing air quality.

If you want to reduce ozone in Mexico City, you have to reduce VOCs. VOCs come from all kinds of things. Paints. Solvents.  Adhesives. Cleaning Products. Cosmetics. Even dog poop. Yes, dog poop.  Carlos Álvarez, a chemical engineer at Mexico’s National Polytechnic Institute, has calculated that 250,000 tons of dog poop are “deposited” annually on Mexico City’s sidewalks, significantly contributing to VOC emissions. 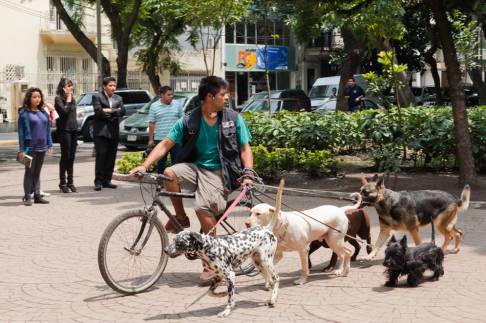 In addition to targeting these sources, it would be worth looking again at transportation. But rather than restricting driving, it’s time to look at gasoline regulations.

California provides a particularly useful point of comparison. Los Angeles is similar to Mexico City in that both suffer from high ozone levels and both are VOC-limited. Since 1996, California Air Resources Board (CARB) gasoline has been required throughout the state. Considerably more stringent than U.S. national fuel standards, CARB gasoline must meet strict content requirements for olefins and other highly reactive VOCs.

CARB gasoline has been shown to be very effective at reducing ozone. When CARB gasoline was introduced, it reduced Los Angeles ozone levels by 16 percent, according to research from the Energy Institute’s Max Auffhammer and Ryan Kellogg. California has also achieved additional ozone reductions by enforcing strict requirements for vapor recovery systems which reduce VOC emissions at gas stations when drivers are filling up their tanks.

Similar requirements could work in Mexico City too.  Whatever approach is taken, let’s then evaluate the policy using data. Too much is at stake to continue rolling out the same tired policies. Let’s use modern data techniques to quickly and credibly figure out what works and what doesn’t work.